How to Make Your Child Smarter – Try the Green Fix

Parents the world over look for ways how to make your child smarter and confident. If you have thought about letting your offsprings roam more in the green, you are unto something.

Researchers now suggest that living near green spaces has a positive effect on children’s intelligence and behavior. A new study conducted in Belgium finds that children who grow up next to a city park or a large garden have, on average, a higher IQ than children in less green areas. According to the researchers, there may be several reasons for the benefits of green spaces.

Children who grow up in more green neighborhoods have a higher IQ and are less likely to behave than others in more urban areas. This positive relationship between having access to green spaces and favorable mental development is the conclusion of a study by the University of Hasselt in Belgium. The research examined more than 600 children aged 10 to 15 in the province of East Flanders, Belgium.

For those who lived near green spaces such as gardens or city parks, the researchers found an IQ increased by an average of 2.6 points.

Attention problems or aggressive behavior, on the other hand, were less pronounced than among peers in more urban environments. The effect was felt in both poor and affluent areas. According to the study authors, parents’ income and educational background had no impact on access to green spaces. 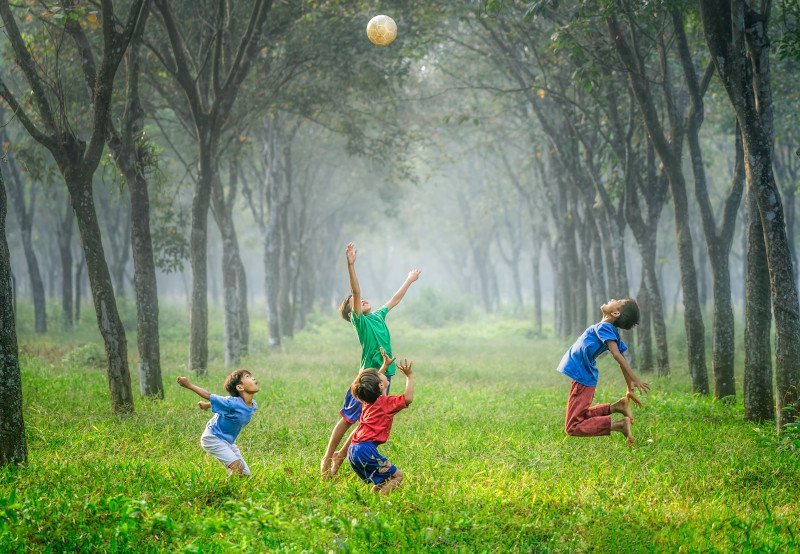 Tim Nawrot, one of the study authors, told the newspaper: “There is more and more evidence that green environments are related to our cognitive abilities, such as memory and attention.”

Nawrot draws concrete recommendations from this: “I think urban planners should invest more in green spaces because it is really valuable to create an optimal environment in which children can develop their full potential.”

The researchers suspect that the lower noise and stress levels and the ability to play in nature, have a positive effect on IQ.

These findings are in line with how noise pollution has a detrimental effect on your health, including your cognitive abilities. So, finding silence and experiencing stillness is vital for growing children too.

To measure how “green” a child’s neighborhood was, the researchers used satellite imagery. The average IQ was 105 points. Four percent of children had an IQ of fewer than 80 points – all of them had grown up in a little green environment.

The cognitive differences between children living near or far from green spaces could only be observed in cities. Nawrot assumes that in suburbs or villages, there is enough nature there anyway and that all children benefit equally from it.

You have Successfully Subscribed!

The Highly Sensitive Person and Noise Pollution - How to Cope

Yes, You Need More Personal Quiet Time - Here is Why

Our mission is how to find silence in a noisy world. We explore ways to escape the noise. Keeping it quiet in an ever more noisy world is crucial. Investing in your quietness and inner silence is one of the best investments you can make to feel balanced be productive at the same time.

Quietness.me is your online place for all things quietness, silence, stillness, and simplicity.